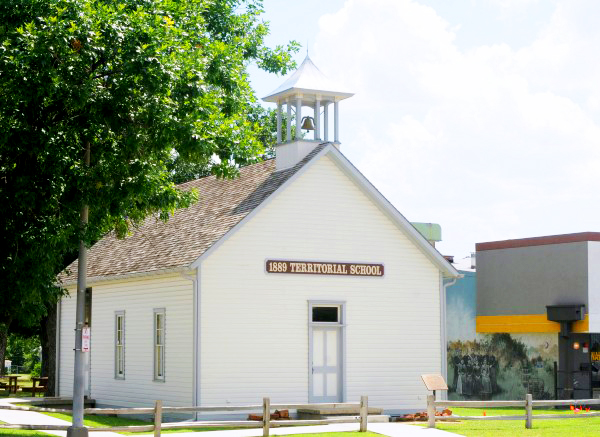 Representatives from the Edmond Historic Preservation Trust, owners of the schoolhouse, provide tours to the general public on these days.

Directions to the Schoolhouse:

Parking and drop off is located BEHIND the schoolhouse on the access road that passes in FRONT of Sherry’s Drug. Heading east on Second Street, turn right (south) on Littler Avenue and turn left (east) into the parking lot for All American Fitness, Subway and Sherry’s Drug.This parking lot leads to an access road that passes BEHIND the schoolhouse.

On a summer day in 1889, Jennie Forster marched into Brown’s Lumber Company and ordered enough lumber, on credit, to build a school house for the new village of Edmond, Oklahoma Territory. The Ladies School Aid Society, consisting of 15 women, had been formed and the ladies were determined to have a proper school for the local children.

The women set to work immediately to earn the money to pay back the lumber bill. They badgered their husbands, as well as the other town merchants and citizens. Mrs. Forster joked in later years she was sure the businessmen “felt like running out the back door when they saw me entering the front door.”

Courtesy of the Edmond Preservation Trust

Edmond’s 1889 Territorial Schoolhouse is the earliest one-room schoolhouse in the Oklahoma Territory. This formative schoolhouse helped to shape and create the beginnings of higher education in the region and led the way to other educational facilities.

The 1889 Territorial Schoolhouse on 124 E. Second Street is possibly the last remaining original 1889 structure in Edmond. The Historic Schoolhouse was restored as an Oklahoma Centennial Project by the Edmond Historic Preservation Trust. The Schoolhouse re-opened to the public on April 15, 2007. The first class of students to visit the historic site on the first Schoolhouse Field Trip was in the fall of 2008.

Many people drove past this historic site when it was the boarded up Sander’s Camera Shop, not realizing they were seeing and passing by an historic building. This special restoration project was carried out due to the efforts of the local Trust, local historian Lucille Warrick and a group of concerned citizens. Major restoration uncovered the original blackboards buried underneath Sander’s Camera Shop interior walls. Years of hard work and dedication by the Edmond Historic Preservation Trust have brought the Schoolhouse back to its original function and appearance.

The 1889 Territorial Schoolhouse is located on the corner of Second and Boulevard in Edmond, Oklahoma.

For information on scheduling “A Day at the 1889 Territorial Schoolhouse” field trip for a class or homeschool group click here.