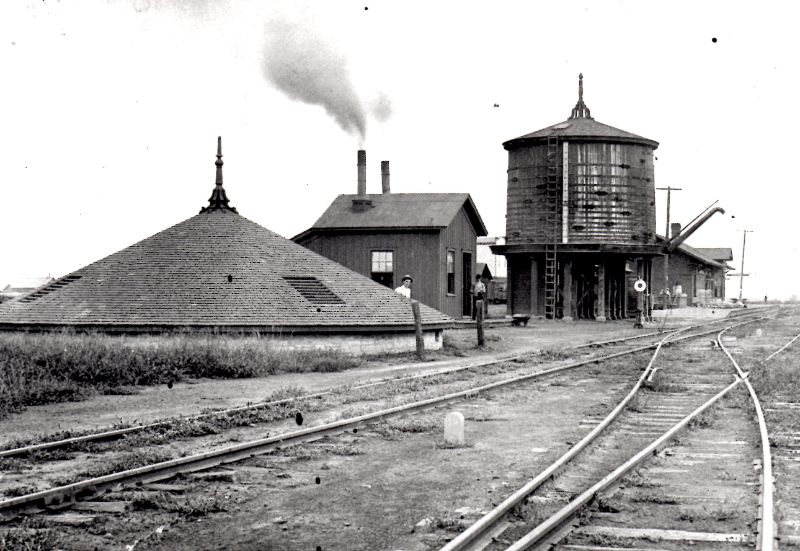 A Coaling And Water Station

From Left: Edmond’s Water Well, The Pump House and Water Tank on Stilts with a standpipe for watering passing trains. In the foreground, the small marker in the ground, in between the tracks is the actual “Mile Marker 103,” which indicated the number of miles from Arkansas City, Kansas to Edmond, Indian Territory.

To equal the depth of the original Edmond Water Well it would take 22 men, 6 feet tall to equal its depth. The well was dug using a process of hand digging with horse drawn pulleys to remove the soil from the original well. One hundred and ten carloads of rock were use to line the deep well and prevent its collapse.

The first building project in Edmond was the construction of a deep water well. Colonel J.W.F. Hughes was the Santa Fe Roadmaster during the construction of the Edmond Station. Hughes fired the first foreman of the project and brought John N. Steen to Edmond in the winter of 1886 to oversee the construction of the enormous well. Steen, then superintendent of the Santa Fe’s water service was charged with removing carloads of dirt and digging the well to its eventual depth of one-hundred and twenty-eight feet. The well was thirty feet in diameter and lined with 110 carloads of rock to prevent its collapse.

According to Santa Fe records in 1892, the water table in Edmond was said to range from 20 -90 feet.

The water well, which was the source for filling the water tank on stilts had to be built to the Railroad’s specifications.  Road crews hand-dug the well with picks and shovels. A wooden frame of timbers was built over the well with pulleys attached to ropes, the ropes were attached to mules or horses so that the excavated dirt could be drawn up and out of the well. The 30 foot diameter limestone rim seen above 2 feet above ground, was covered with a conical roof after 1898 to keep the water clean with louvered vents for air circulation.

Once the well was completed, Steen built the little red Pump House (middle structure, pictured top left). This small structure, also built in 1886, commonly had a footprint of 16’ x 16’ feet. Steen maintained the boiler, pumps, cylinders and pipes that carried water from the underground well to the water tank so that passing trains could fill with water at the track’s side.

The Clifton coal chute (pictured below) was used in Edmond from 1886 to 1902. The Clifton coal chute had 12 pockets, with tracks running along both sides to service locomotives. Gondola cars loaded with coal would be pushed up the ramp under the facility where crews would shovel the coal into the “pockets” pictured under the roof of the structure. Each pocket could hold 5 tons of coal. Fireman would pull the pocket gate down that would drop the coal directly into the engine’s tender parked below the coal chute.

Note: In 1937, the water well was filled in with concrete to prevent collapse of the water well due to the increasingly heavy weight of trains traveling into the town of Edmond. In the thirties, diesel locomotives were beginning to replace steam engines which was another reason the water well became outdated. John B. Moore, 2011