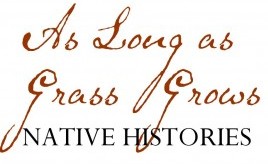 As Long As Grass Grows

The original idea of Indian removal to the West was devised under Thomas Jefferson, based on voluntary consent. The following quote has become infamous for representing the failure of a long succession of U.S. presidents unable to fulfill their promises to American Indians:

“You are now in a country where you can be happy; no white man shall ever again disturb you; the Arkansas [River] will protect your southern boundary when you get there. You will be protected on either side; the white shall never again encroach upon you, and you will have a great outlet to the West.

As long as water flows, or grass grows upon the earth, or the sun rises to show your pathway, or you kindle your camp fires, so long shall you be protected from your present habitations.”

It is impossible to know when humans first came to this region. Before the coming of the white man, bronze-skinned men and women from northern Asia had been exploring and settling in the Americas for anywhere from ten to fifty thousand years ago. Archaeological clues give evidence of giant mastodons and other primeval animal life, but also of foraging hunter bands, prehistoric pole-and-thatch villages, and great burial mounds. The indigenous Spiro Mound builders flourished in Oklahoma from 500 to 1300 A.D..

The Spanish were the first European explorers to record their observations of the area as early as 1541, noting at the time that tribal boundaries were unclear.  The Spanish and French recorded their observations of the Caddo, Wichita, Quapaw, Osage, and Plains Apache tribes that were traveling through the region using resources of the abundant plains to provide for their families.

In the late seventeenth century, Comanches adapted Spanish horses to buffalo hunting and pushed their territorial range as far east as the Cross Timbers. Their superior war resources enabled them to subdue all tribes in their way and by 1725 they had mastered the southern Great Plains.

Following vast herds and establishing early economies, seeking shelter, establishing boundaries and putting down roots created alliances and inter-tribal wars as more tribes came to the area by the start of the nineteenth century.

Indian removal from the eastern United States began in earnest in the 1830s and continued until the 1870s. In the 1830s the Federal Government began moving the Indians, including the Five Civilized Tribes, to Oklahoma, Kansas, Nebraska, and the Dakotas. In 1854, many of these Indians were moved onto the plains of Oklahoma which were ideal for roaming buffalo herds. The Indians hunted the buffalo for food, clothing, shelter, and fuel. With the introduction of white settlement into Indian Territory, the buffalo supply quickly became depleted.