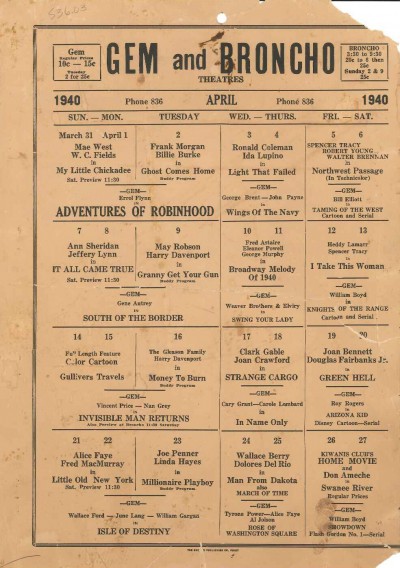 By 1929, the age of the “talkies” arrived and older theaters had gone out of business in Edmond. A two-story building on the corner of Main and Broadway, built in 1935 by W.Z. “Willie” Spearman, eventually became the home of the Broncho Theater. In its hey-day, the Broncho featured carpeted aisles, draperies, rest rooms, and two projection booths with synchronized sound.

The Broncho’s first showing was on January 10, 1936. The Broncho was eventually sold to R.R. McCoy, and the theater operated on and off into the 1970s.

Edmond Hospital was originally located on the second floor of the same Spearman building, just above the Broncho Theater downtown. It was a chilly day in February of 1947, just three days before the official opening of Edmond Memorial Hospital, when a young woman in labor would become the very first patient of a highly anticipated new medical center in downtown Edmond. The small hospital was founded and built by a group of community business leaders and physicians determined to provide Edmond’s citizens with a quality hospital in their own community. At the time, Edmond was a small town separated from Oklahoma City by miles of open farmland. However, strong community support was immediately evident as local townspeople began donating sheets, towels, pots, and pans to the hospital.

The hospital continued to flourish until 1967 when a new 35 bed hospital opened its doors on the northwest corner of Second Street and Bryant.