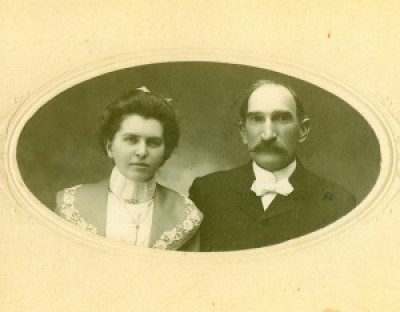 Jesse Ringer served one term as Edmond’s Mayor from 1905-1906. He was tragically killed by a fast freight train hitting Ringer and Real Estate partner William Nave’s automobile in December of 1917.

A structured local government is vital for any town. This government maintains peace and organization as well as provides a variety of services to the public. Edmond had a temporary mayor and committee for the first few months until a citywide election could be held. Logan Cox served as temporary marshall until Robert Galbreath was elected as Edmond’s first official town marshall. In addition, Galbreath served as U.S. Postmaster in 1893. Since that first appointment Edmond has been known for its successful crime prevention programs and its dedication to public safety.

In 1903-04 Edmond’s fire station was established on Broadway. The department consisted largely of volunteers until 1971. Even college students volunteered in exchange for room and board. Edmond’s first fireplug was installed around the turn of the 20th century at Third and Jackson and was used until June 1996. The city’s first horseless firetruck was a 1929 Seagraves that has been remodeled and presently housed inside a local firestation.

Just a month after settlement Franklin L. Green was appointed as Edmond’s first U.S. Postmaster. Today Edmond has several post offices which serve the city’s growing population. Located inside the former post office building at 101 E. First is a mural by Taos artist Ila McAfee Turner which depicts early Oklahoma. “The Yellow Ribbon” another work of art is located at the Broadway post office. This artwork, a tribute to the postal workers killed in the August 1986 post office shooting, represents the city’s outpouring of support during this tragedy.

Edmond’s leaders have guided the community through many changes as the town evolved from an instant prairie town in April 1889 to a city known for its fine educational system, pleasant lifestyle and community spirit.