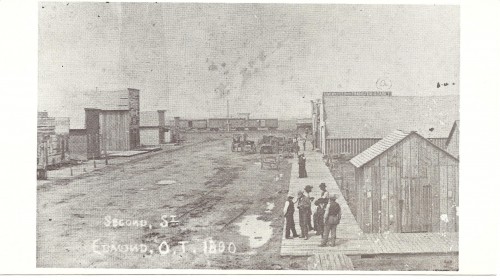 St. John the Baptist Catholic Church was completed and dedicated June 24, 1889. It was located on the corner of Boulevard and First Street. This was the first church building constructed in the Unassigned Lands of Indian Territory.

A replica building, now housed in the Edmond Historical Museum was created by the Knights of Columbus organization at exactly one quarter the scale of the original as an Edmond Centennial Project, 1989.

It’s a Fact: St. John the Baptist Church opened its doors for mass just two months after the run June 24, 1889. At the time there were 5 Catholic families in Edmond. Not to be outdone, 70 Protestants joined forces to hold the first Union Sunday School in a new store building on June 23rd.

The Edmond Sun was established by Milton W. “Kickingbird” Reynolds on July, 18, 1889. Reynolds brought his manual printing press, typewriter and determination from Kansas to Edmond in the ’89 Land Run. In 1890, the subscription price was $1.50 per year or 75 cents for six months.

The Edmond paper is Oklahoma’s oldest continuously published newspaper and the hometown voice of Edmond during its territorial days. The newspaper’s first location was in a small wooden-frame building at 109 N. Broadway.

Edmond has always made the pursuit of an Education a strong priority. After the run of 1889, Jennie Forster ordered enough lumber on credit to build a one-room schoolhouse for the new community of Edmond. Jennie Forster and the Ladies School Aid Society, consisting of 15 women were determined to have a proper school for their children.

The new schoolhouse was completed by August of 1889 thanks to their persistence. The first class of 19 students reported September 16, 1889, led by Edmond’s first teacher: Miss Ollie McCormick.  The schoolhouse is currently open to the public on the first two Saturdays of each month from 1-4 or by appointment.  It is also a popular site for 3rd-grade field trips.

Today’s University of Central Oklahoma is the oldest institution of higher learning in Oklahoma dating back to Dec. 24, 1890, when the Territorial Legislature voted to establish the Territorial Normal School.

The Territorial Legislature located the new school in Edmond, provided certain conditions were met. First, Oklahoma County had to donate $5,000 in bonds, and Edmond had to donate 40 acres of land within one mile of the town. Ten of those acres had to be set aside for the new school.

Work started in the summer of 1892 on Old North Tower, the first building on campus. Occupancy began Jan. 3, 1893. The school first operated as a normal school with two years of college work and a complete preparatory school. In 1897, the first graduating class — two men and three women — received their Normal School diplomas. In 1904, Territorial Normal became Central State Normal School. Statehood was still three years away.

Gracelawn Cemetery was established by the citizens of Edmond in April 1895 and located at the northwest corner of East Danforth and North Boulevard. It replaced Edmond’s first cemetery (1889-1895) that was illegally placed in an area of the school land section on the east side of South Rankin from Second to Fifth Streets. Gracelawn is the final resting place of noted civic leader and publisher Milton “Kickingbird” Reynolds, and is the final resting place of many Edmond pioneers. The distinctive exterior rock wall was a WPA project, installed in 1940.

The first Telephone System in Edmond began in January 1902 with Bell Tuttle as the “hello” girl. The Western Union Telegraph, begun in 1851, was fazed out by “Ma Bell” for person to person communication. Rural phone lines were slowly installed in the Edmond area from 1904 until 1906. Howard’s Drug was the location of Edmond’s First Telephone.

In 1902 the City Council ordered that all sidewalks were to be built of brick, asphalt or flagstone.

The first Edmond Fire Company was organized in 1903 with John Sumner as captain. In 1905, after two houses burned to the ground, the City Council issued an ordinance that every occupant of lots on Broadway were to keep a barrel of water and one peck of salt on hand in case of an emergency.

The July 20, 1905 edition of the Edmond Enterprise reported “Last Saturday Dr. O’Toole and his son went to Oklahoma City and purchased an 8-horse power gasoline Tonneau runabout. This is the first and only auto owned in or near Edmond.” Citizens did not want cars in town and adopted the name “Trouble Wagon” for Dr. O’Toole’s new purchase. “Horseless Carriages” were frowned upon in 1905.

An Edmond Sun editorial of the day stated “No Automobiles for us!” The editor decried the practice of running through town at “lightning speed.” Dr. O’Toole’s purchase of his new car prompted the City to take drastic measures.

In 1906 the City Council mandated a speed limit of 5 miles per hour in town! The first streets to be graded were First and Second. By the early 1920s brick walks were replacing wooden boardwalks, paved streets began to replace dirt roads and the trolley and the automobile became a popular mode of transportation instead of horses and buggies. As the automobile gained popularity, the citizens of Edmond saw many of the wagon shops, livery stables and harness shops close. The businesses, which opened in their place, were auto dealerships, filling stations and auto garages.

Edmond completed its new City Hall Building in September 1910. The two-story improvement utilized half of its lower floor as a fire station and a jail cell, with offices for the mayor and city clerk and a very modern indoor toilet on the second floor. It was located on the northwest corner of East First and South Littler.

Men and Mules prepared the roadbed for the Interurban line down the center of Broadway. The first Bunting-covered Interurban Railway Cars arrived in Edmond from Oklahoma City on May 29, 1911. The occasion was celebrated with a throng of Edmond citizens, speeches by Anton Classen, John Shartel and John Mitch.

The Interurban line offered a great convenience to Edmond citizens and Normal School students, thankful for special rates designed to help their commute. By 1916, the Interuban line extended all the way to Guthrie. The Interurban and its familiar bell clang ceased to operate in 1946.

The Interurban trolley was tethered to a track on the ground and an electric power line overhead. The early trolley cars were heated with coal stoves and often had leaded glass windows. A one-way fare from Edmond to Oklahoma City in 1911 cost passengers 25 cents.

A new exhibit featuring the “FIRSTS OF EDMOND” was completed in the fall of 2011.