Edmond History Museum > exhibits > I Remember That! Edmond In The 1980s 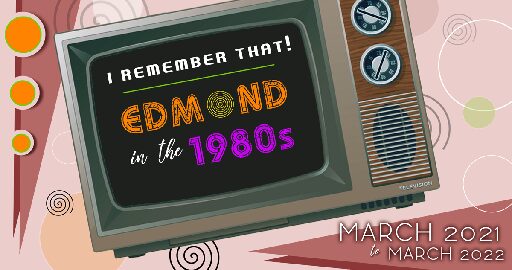 The Edmond History museum presents I Remember That: Edmond in the 1980s, which runs from now until March 2022.

The 1980s were at time of big hair, spandex, and major political upheaval. The decade saw the Reagan-era presidency, the beginning of MTV, and a royal wedding. Shoulder pads aside, the 1980s is also remembered for its corruption, consumption, and volatility. Edmond residents, not immune to such trials, experienced the oil bust, increased crime, an F3 tornado and the 1986 Post Office Massacre.

It wasn’t all bad news though–Edmond’s population and business development increased. The long-awaited Lake Arcadia project was completed, Edmond hosted the 1988 PGA golf tournament, and the decade was rounded off with a huge 100th birthday party.

Artifacts and photographs showcase an era rich in pop culture and large-scale celebrations, but also evidence of how the city responded in the face of tragedy. Artifacts include: PGA items, an Atari game system with Pac-man game, an aerobic workout record, Liberty-Fest memorabilia, the Postmaster General’s speech following the massacre, Berlin Wall fragments, a Rubik’s cube, an Edmond Memorial senior sweatshirt, and more. New artifacts will be on display in September.

If you lived through the 1980s, you know it was a vibrant and exciting time. If you didn’t, come see what you missed.