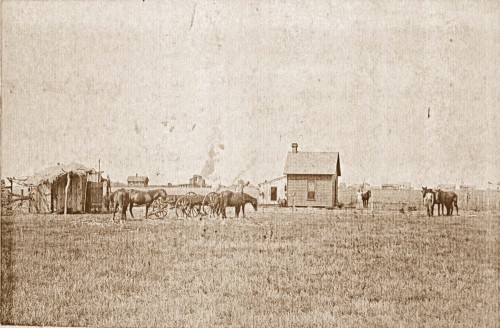 Hardy Cryer Anglea was one of the first to arrive in Edmond on April 22, 1889. His claim house was one of the first homes built in Edmond, along with Colonel Townsend and John Wheeler Turner. Anglea married Miss Daisy Collier of Tennessee in 1890 –she died in 1896. Anglea married his second wife Eva Link on Halloween in 1899. Anglea was an authority in real estate and considered one of the best informed men in Oklahoma on the resources of the new state and land and property values.  He brought thoroughbred horse stock to Oklahoma Territory from Tennessee. His brother, John M. Anglea owned the historic home that later became the “Angel House.”

Oklahoma City civic leader and land developer Anton H. Classen was born October 8, 1861, at Pekin, Illinois. Classen received a common school education in Illinois and studied law at the University of Michigan. Two years after he graduated from college, he made the 1889 land run into the Unassigned Lands of Oklahoma Territory, living for a brief period in Guthrie. The town had too many lawyers, so he sought opportunity in nearby Edmond. While practicing law, Classen edited of the Edmond Sun newspaper and promoted the location of Oklahoma Territory’s first normal school at Edmond. He served as Edmond’s Postmaster and was instrumental in bringing the Interurban Rail to Edmond.

Charles A. Dake came to Edmond shortly after the Land Run of April 1889 from Lowell, Michigan. Dake promptly opened a photographic business. He took a series of photographs on June 29th, 1889 that recorded the rapid growth of the town. The photographs shown at left show “Edmond Looking West” and “Edmond from Coal Shed,” were both taken as a part of this important series. Thanks to his pioneering photography, today we are able to see the progress the town of Edmond had made in just 37 days after the Land Run that opened the “Unassigned Lands.”

Charles A. Dake was elected Mayor of Edmond from 1893 to 1894 and took many early photographs of the landscape and its pioneers. Ironically, there are no known photographs of  Edmond’s pictorial historian. Dake died in April 1899, ten years nearly to the day after the founding of the town.

John & Ophelia Gower relinquished a portion of their 160 acre homestead to establish the Gower Cemetery in November 1889. The Cemetery was historically significant for its association with the African American settlers who lived in the area of their original homestead. John Gower was a stonecutter and Ophelia served as a mid-wife.

Burials in Gower Cemetery included an advanced group of “Americans of Color,” as an outgrowth of segregation. The first burial at Gower Cemetery occurred on November 20, 1896.

Succeeding generations maintained and cared for the cemetery. Willie T. Gower, their eldest son developed a burial plan for paupers, homeless and indigents of the streets in the 1930s.

On November 18, 1991, the Gower Memorial Cemetery was added to the National Register of Historic Places. The cemetery is located on Covell Road between Douglas Boulevard and Post Road.

Gottlob Fink was an early Edmond businessman greatly interested in the betterment of Edmond and the community. He engaged in real estate and was an organizing officer of the Citizens State Bank in 1901 and the Farmers State Bank in 1907. The two banks were consolidated under a national charter in 1912, and continued as the Citizens Bank with G.H. Fink serving as a cashier. He eventually became president of Citizens Bank in the 1920s.

The Fink family immigrated to America in 1880, and settled near Oregon, Missouri. At age 23, young G.H. came to Oklahoma Territory where he took up a claim ten miles west of Edmond.

George C. and Jennie Forster Arrived in Edmond April 22, 1889 and established a Pioneer Grocery in a tent day after the run (1889-1893) their grocery store went on to be the first library of Edmond, Oklahoma.

Aaron Fretz was born in 1840 in Pennsylvania and was a Civil War veteran. Aaron Fretz filed one of the first taxpayer’s lawsuits, complaining of what he felt was an illegal resolution in 1913 giving the Normal School 2.4 million gallons of water a year. The Supreme Court ruled against him.

When he was 77 years old he took a 10-month long trip, by horse and wagon, revisiting the Civil War battlefields where he fought. He visited 10 states on his journey. Aaron Fretz made the Run to Edmond in 1889 by train, was a civic leader, mechanic and organizer of the local G.A.R. Post. Fretz survived the Civil War and lived to the age of 95, helping the Red Cross in the First World War effort before his death in 1935. In 1918, the Oklahoman reported that Fretz still possessed the claim stake flag he used in 1889 to stake his claim. It was yellowed and with the handwritten letters “Taken – Center 160 acres – A. Fretz.” Fretz brought the first Minister to Edmond, helping to build the first church and establishing the first free public school in Edmond. Fretz died in the Union Soldiers Home of Dayton, Ohio on January 29, 1935, buried in the Union Soldier’s cemetery there. Fretz Street in Edmond is named for him. The above photograph was taken by Charles Dake.

Pioneer Issac Wesley Rodkey was born in Maryland, the son of a farmer, in 1864. With partner George Farrar, purchased the Gallihue-Martin Mill, renaming it “Eagle Flouring Mill” in 1897. The company, renamed “Rodkey’s Best Flour” in 1911 and eventually served the entire southwest United States. The Rodkey Mill was owned and operated by members of Rodkey Family until 1972. Issac Rodkey married Alice Kate (Catherine) Rank in 1888.

Catherine Rodkey, founder of the Edmond Gardening Club, spearheaded the beautification of many Edmond parks.

A community leader in religious and educational circles, was hired as the Separate School teacher in 1895 as a salary of $50 per month.  William was the second principal and teacher of the early Edmond Separate School that he nicknamed “Tuftime.”  As a true Oklahoma pioneer, educator, and religious leader, Sulcer participated in the shaping of conditions for the establishment of the influential Oklahoma County Ida B. Wells Teach Association and the State Oklahoma Association of Negro Teachers.

He also played a key role in the establishment of the University at Langston.  Langston University was established in 1897.  At that time, a university for the preparation of black teachers was needed because the Normal School in Edmond refused to enroll them.  At the time of
his death at age 102, W.M. Sulcer was Oklahoma’s oldest African American teacher and the last member of the Tennessee group that had organized Oklahoma City’s most significant historic African American-related resources of its time: Calvary Baptist Church.

Colonel Eddy Baldwin Townsend, who built the first house in Edmond, enlisted at the age of 17 in his father’s regiment: 149th New York State Volunteer Infantry. Before his leadership built the town, he had worked through the ranks from private to second lieutenant in the 8th New York, was made a major for his distinguished service while in Richmond, and finally came to his rank as colonel as a member of General Ordway’s staff. Colonel Townsend was also a special agent of the Interior and an official of Washington D.C.’s government under Alexander R. Shepherd. Townsend died in 1909 in Washington D.C., and was touted as “one of the best known citizens” in the capital city. He is buried in Arlington Cemetery.

Do you have ancestors who were Niners & Pioneers in the Edmond area? Visit our Exhibit “I was Lonesome, Awful Lonesome,” to read more biographies.