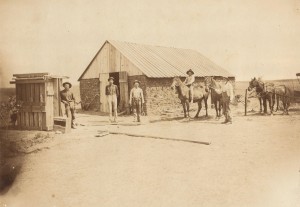 With limited natural resources, early settlers to Edmond built their homes from sod. A typical sod house was about fourteen feet by sixteen feet. About an acre of land could be broken into enough sod bricks to build a home of this size. Sod bricks were cut using a horse and a breaking plow, set at a depth of 3 to 4 inches thick. Sod bricks were cut in long strips from eighteen to thirty inches wide. Morning was the best time to harvest sod bricks which were easier to handle when the moisture content was high. The deep roots of native mixed grasses also kept the sod from crumbling. Soddies were built by staggering the sod pieces with the grass side down. Timber, support poles were added to hold the weight of the roof, which in some cases was also made of layers of sod blocks. Wooden frames created spaces where windows and doors could be placed.

Most 89ers who planned to farm and raise livestock would build their barn before they built better homes because protecting their grain, seed, and hay was their first priority. Barns served to protect animals,  straw, hay, grains and planting seeds from the elements.

Edmond was settled in April 1889, the time of year in Oklahoma for strong storms. Many planted small gardens for food and most planted turnips first because they are a fast crop, able to provide turnips for the family and the turnip greens to feed their livestock.

In 1890, families were settled and could plan ahead for their crops and further establish their farms, planting cash crops like wheat, oats, barley, and cotton. Much of the crops were sold in bulk and traded to other farmers for crops they didn’t have themselves. Barns were essential to their success because goods and products were stored inside.

Heating Soddies, cooking food and boiling clothes to get them clean required fuel. When fuel was in scarce supply on the tree-less plains of Oklahoma, pioneer families scoured the prairie for anything burnable. They relied on assortments of dried twigs, tufts of grass, hay twists, old corncobs or woody sunflower stalks. “By far the most popular sources of fuel, however, were the abundant chunks of dried dung left by grazing herds of cattle and buffalo. In dry weather, the pioneer housewife and her children roamed the grasslands in search of these cow and buffalo chips. Stored in old gunny sacks, the chips were stacked in a dry corner of the family home to be burned throughout the long winter months.”

Many early settlers needed to find shelter from the weather, but Oklahoma prairies short on wood did not provide many natural resources to build homes with. Many families dug into the ground or the side of a hill. Natural terrain provided the walls of their home. Sometimes sod bricks or wood was used to close off the exposed areas of the house. Some dugouts were strong enough to support the weight of livestock. After the land was farmed and harvests brought in family incomes, many people then had enough money to afford the lumber to build larger, nicer houses. Dug-outs then served as storm shelters or root cellars.

A surge of people participated in the April 22, 1889 Land Run into the Unassigned Lands of central Oklahoma. The 1889ers, as history would name them, ranged from a variety of professions, religions, ethnic groups, social boundaries and educational levels. However, they all desired a plot of land to call their own.

Once land was secured, the next priority was planting crops. While the fields were being farmed, some families lived out of the wagon they made the run with or a tent until a permanent structure was built. This type of small shelter was sometimes called a “Claim House.”

Cabins and Claim Houses were strong enough to withstand the weather and no bigger than a camping tent. These structures were built in just a few days with the help of family members and neighbors. E.B. Townsend, Hardy Cryer Angela and John Wheeler Turner were some of the first 89ers to build houses in Edmond. Families who came to Edmond with money were able to buy lumber for houses immediately following the Land Run.