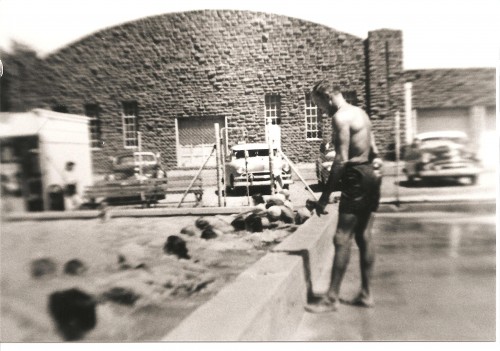 Edmond’s First Public Swimming Pool, originally located directly behind Old North Tower on what is today the UCO campus. The pool was built in 1915 by the Manual Training Class. The first pool was “fenced in” with wire barricades and was reportedly rich with the red mud silt of the area.

The Kiwanis Swimming Pool, also known as “Seymour Swimming Pool,” operated from the 1930s through the 1950s on 5th & Boulevard. Ted Anderson, a former Edmond educator, councilman and sports supporter teaches swimming lessons to the children lined along the pool side. Edmond Armory is seen in background.

An Edmond Sun advertisement in June of 1933 for Seymour Swimming Pool refers to Frank Seymour, a Kiwanian, who purchased the property in 1930. A Single Swim cost 15 cents, a week’s ticket was 50 cents, and a season ticket cost $3.00 in 1933.

In 1935, advertisements started appearing in the Edmond Sun for the “Kiwanis Swimming Pool,” officially opening under that name in June of 1935. With remarks made by Mayor Chitwood, the official opening touted the “Life Saving Course” that if passed, could earn Juniors and Seniors a “life saving emblem.” Swimming and diving contests, free admission swims and advertisements in the summer issues of the Edmond Sun encouraged citizens to “enjoy the most healthful recreation:” swimming.

In 1977, construction began on the City’s new Aquatic Center, which opened the summer of 1978. The pool was designed to offer 6,000 surface feet to accommodate bathers of all ages. This pool, located in Hafer Park, was demolished in 2001 after approval by Edmond voters to create a new facility. Pelican Bay Aquatic Center, opened on June 7, 2002, was re-designed to incorporate splash pads, wading pools, water slides, a current channel and lap swim areas on 1034 S. Bryant.