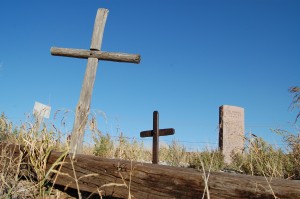 The Right of Way Graves

Frank Mosier and Willie Davis were part of a crew of the Southern Kansas Railroad who were laying rail in September 1886 through the site of present day Edmond. Two miles to the south of the first Edmond train station, these two men died in a fight. Because the men were railroad employees they were buried in side-by-side graves on the west side of the railroad right-of-way. Frank Mosier’s red sandstone marker reads: “Frank Mosier, Died September 17, 1886, Age 22.” The other grave is marked with an iron cross, fashioned by a blacksmith, reading simply “Willie Davis.” This iron cross was apparently erected by the brother of Willie Davis, who was believed to be a Catholic priest from Belgium. The cross was placed for Davis years after the fight and consequent burial occurred, when Edmond was a young town.

The Oklahoma Historical Society erected a red granite marker at this historic site in 1979, which carries the history of the Right-of Way-Graves. The red sandstone marker (pictured above), belonging to Frank Mosier was embedded into the OHS granite marker after it broke away from the original tombstone. For many years this historic site, unique to Edmond’s railroad development was carefully tended to by Santa Fe workmen.

The Burlington, Northern and Santa Fe currently own, oversee and maintain the right-of-way and railroad tracks in Edmond. However, due to budget constraints, the Railway company no longer cares for the site. Time and weather have eroded the original, historic site and without regular maintenance, the burial site has been repeatedly vandalized and is currently (2013) in a poor state of disrepair.