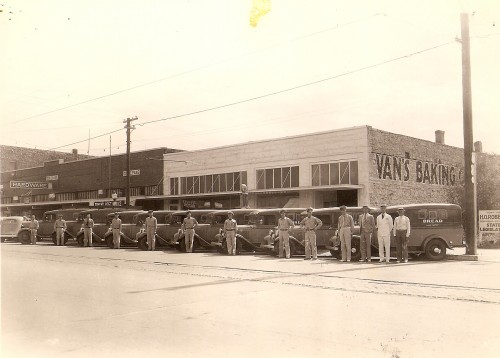 Van’s Bakery was a landmark in Edmond, Oklahoma for 44 years and was ranked in its day as one of the outstanding independent bakeries of Oklahoma. Many of Edmond’s citizens will remember the smell of Van’s bread baking as they walked or drove through the downtown area.

In 1889, George Van Antwerp made the Land Run of 1889 and settled just south of Oklahoma City. Everett Van Antwerp was born in 1893, four years after the run.

Van’s Bakery opened in 1915 by George Van Antwerp and his brother Irvin. The building included a cafe and a confectionary. In 1921, George’s son Everett came out of service in the first world war and bought his father’s and uncle’s shares of the business and  in 1928, Everett Howard Van Antwerp moved the bakery to a location on the northeast corner of Second Street and Broadway. E.H. Van Antwerp and his uncle Irvin shared in the running the bakery and cafe after George left the business. In the early days, Van’s Cafe was a popular location in town because it served malts, shakes and sodas on the cafe side. Irvin eventually oversaw the running of the Cafe and Everett took control of the operations of the Bakery.

The Bakery was named for Everett Howard Van Antwerp, affectionately known as “Van” by his closest friends. In the beginning, bread was delivered by hand in boxes, but by 1927 a truck delivery service had been established. Bread was made by hand in the early years of the business. In its boom years, Van’s bakery was known for its wide variety of bread, lip-smacking pies and cakes. Because of local demand, “Van” hired five women to bake and decorate birthday cakes, which were the favorite of mothers and children alike.

Van’s Bakery was famous for its potato bread which was awarded the “blue ribbon for excellence of freshness, flavor, quality, uniformity, cleanliness and value by the Independent Bakers Council of America in 1950.

As years went by, independent baking companies like Van’s became less successful because grocery store chains carried their own brands. Growing conglomerates could afford the large scale equipment and staff required to create baked goods, making it difficult for companies like Van’s to meet with its rising competition.

Van’s Bakery was closed on December 4, 1965. At that time, stores in Edmond, Oklahoma City, Stillwater, Purcell, Crescent, Geary, Wellston and Bristow were forced to stop stocking Van’s Bread and Everett Van Antwerp retired at the age of 72.

Fun Fact: In 1960, Humpty Dumpty Grocery took Van’s bread off its shelves
to sell the store’s name brand and within 30 days the store was again
stocking Van’s Bread because the townspeople demanded that it be returned to store shelves.