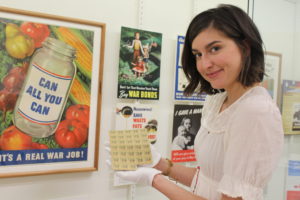 I have great intentions of shopping with coupons at the grocery store.  Not only did my mom teach me to coupon shop, I have a fancy accordion-style coupon file that I can take to the store.

Do I ever remember to take my coupon file?  No.

Do I take the time to clip coupons to put in the coupon file?  No

Sadly, it seems like I’m way too busy to take the time to plan to save a few dollars, much less know what I’m cooking for dinner tomorrow.

After doing research on war rationing for the WWII Edmond: Housewives on the Homefront exhibit, it is clear: I seriously would NOT have made a good WWII housewife. The government’s regulations regarding food availability and spending make my feeble attempts at coupon-clipping look like child’s play. Not only were ration rules lengthy, the parameters changed every week based on supply and demand!

Rationing was a controlled, point-based system for making purchases that assured a fair share of food, gas, rubber, or clothing was available for both citizens and soldiers—because don’t forget that ships of food were regularly being destroyed. Rationing also prevented price gouging, panic-buying, and rushes on a product when it arrived.

By the time America entered WWII in 1941, Great Britain already had a solid year of rationing under its belt, plus, they had experimented with an early version of nationwide rationing during WWI. The U.S. War Office decided to adopt their model of issuing coupon books to each family.

Because rationing was a new concept in America, a variety of tools helped get shoppers up to speed: lengthy newspaper ads, store posters, and even training videos (check out “Point Rationing of Foods” by cartoonist Chuck Jones). The coupon books evolved over time to have different colors, point values, or even target specific products.

Confused? See if this helps.

A Housewife Walks into a Grocery Store…..

I confess, I lack the WWII skills to have done this well!  Why?  First, I’d have to remember to grab my ration book!

Next, I’d need to ask a helpful grocer how many pounds of meat I could get with a 28-ounce limit, because in our pre-packaged world, I buy exactly 1 pound at a time (answer: 28 ounces = 1.75 pounds).

The Result of Rationing

I’m sure I would have gotten up to speed eventually, but if the coupon system sounds daunting, it was nothing compared to the many spin-off activities that took place as housewives adjusted to food limitations.

Since I’m not inclined to eat tongue or kill rabbits, I’m thinking that WWII housewives were terribly brave and resourceful ladies!

And coupon-clipping doesn’t sound so bad after all, and I could use a few extra dollars. That’s it!  I’m getting out my handy-dandy coupon file right now.  I just need to throw out all these expired ketchup coupons from 2004. I’ve got my scissors ready.  Now, I need to subscribe to a hardcopy newspaper.