If This Radio Could Talk: Pearl Harbor Day 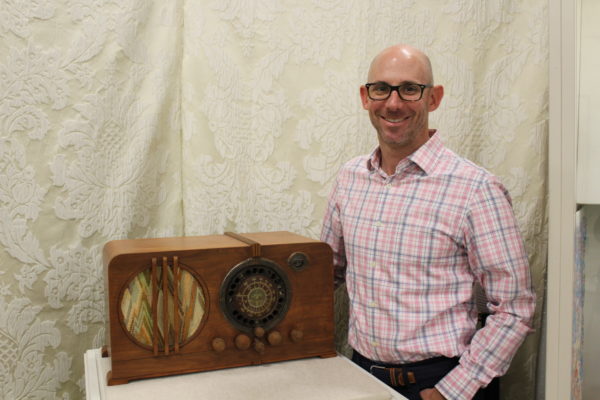 This radio talked for 50 years. From its speaker, the history of our country unfolded. Mary and Ed Boydston, an Edmond family, purchased the Airline tabletop radio from the Montgomery Ward’s catalog in 1938 and actively listened to it for their entire married life.

The Boydstons undoubtedly listened to World War II broadcasts. All Americans were glued to their radios once the first surprise attack on Pearl Harbor occurred on Dec 7, 1941—a major “we interrupt this program” type of announcement.

Unlike today, the news coverage was sporadic, and the radio industry was grappling with how to handle the onslaught of emergency announcements. Radio shows carried on as usual, with only a few brief interruptions.

That fateful Sunday afternoon, many families had turned on the radio to listen to entertainment. It’s possible that Ed Boydston was listening to the Giants/Dodgers football game, the Sammy Kaye orchestra, or a Great Plays broadcast. The Boydstons listened to the WKY Radio station, then located on the top level of the Skirvin Hotel in downtown Oklahoma City. The radio dial is actually labeled with the tiny letters, WKY.

(Actual transcription) Reporter: …This is KTU in Honolulu, Hawaii. I am speaking from the roof of the Advertiser Publishing Company Building. We have witnessed this morning the distant view a brief full battle of Pearl Harbor and the severe bombing of Pearl Harbor by enemy planes, undoubtedly Japanese. The city of Honolulu has also been attacked and considerable damage done. This battle has been going on for nearly three hours. One of the bombs dropped within fifty feet of KTU tower. It is no joke. It is a real war….

For the rest of the afternoon and evening, occasional announcements interrupted the regularly-scheduled radio programs. Since most programs aired live, the performers had to pause for these announcements, and then cut their scripts to account for the lost time.

The Metropolitan Opera was interrupted with the announcement that Japan declared war on the U.S. and Great Britain. During the Jack Benny Program, a local announcement was made to Californians, requesting that civilians not get hysterical, and that they should report for volunteer duty.

In the early evening, First Lady, Eleanor Roosevelt, carried on with her regular Sunday evening broadcast. She dedicated the first four minutes to her impression of the Pearl Harbor attack, then returned to a scripted interview about the labor board. Four hours later, her husband, President Roosevelt, interrupted a Sherlock Holmes mystery to announce that he would address Congress the next day and make his report to the country.

At this point, everyone in the country was aware that their greatest fear was about to come true, that America’s hand had been forced. On Dec 8th, President Roosevelt did indeed announce over the radio that the country was at war. He predicted correctly that Dec 7th was a “date which will live in infamy.” In indignant tones, he vowed that the “unbounding determination of our people… will gain the inevitable triumph—so help us God.”

Undoubtedly, the Boydstons were among the millions of nervous listeners to hear this battle cry over their radio.  The only other radio broadcast that the Boydstons could possibly have heard over their radio during the next 50 years that would come close to rivaling the emotion of Pearl Harbor was the assassination of President Kennedy in 1963.

Between Dec 7 and Dec 8th, the course of American history took a dramatic turn, and this1938 Airline radio, temporarily on display at the Edmond History Museum and Museum, was not only witness to that day—it was the medium that delivered the message that changed the lives of the Boydstons family forever.