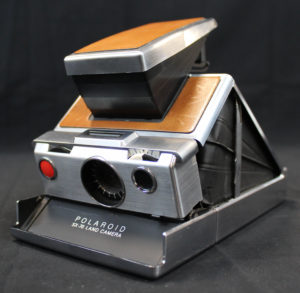 One of my favorite artifacts in the entire collection, not just the Snapshots exhibit, is a Polaroid SX-70 Land Camera from 1974. Although Polaroid’s “instant” cameras had been around since 1948, the first truly “one-step, instant” camera wasn’t a reality until the SX-70 was released in 1972. Until the SX-70, Polaroid instant cameras required the user to perform additional steps after taking a photograph in order to develop the photo; some cameras required the user to apply a coating to the front of the photograph while others required the user to peel the negative apart from the positive to reveal the photo. But with the SX-70, all the user had to do was take a photo and wait approximately one minute for it to develop. 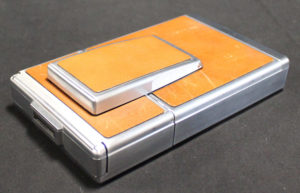 The SX-70 was also the first instant, single-lens-reflex (SLR) camera, meaning that the camera uses a mirror and prism to enable the user to view exactly what will be photographed, rather than simply looking through a rangefinder. The SX-70 was an immediate success and popular with beginners and professionals alike; both Ansel Adams and Andy Warhol were said to have used the SX-70.

Adding to its intrigue, the SX-70 folds up to a size small enough to fit into a jacket pocket and unfolds with a slight pull on the view cap. We are lucky to also have received the leather carrying case for the SX-70.

Our SX-70 was manufactured on August 9, 1974 and donated to the museum in 2018. It is currently on display in the Snapshots in Edmond: 100 Years of Photographs and Cameras in Edmond exhibit.