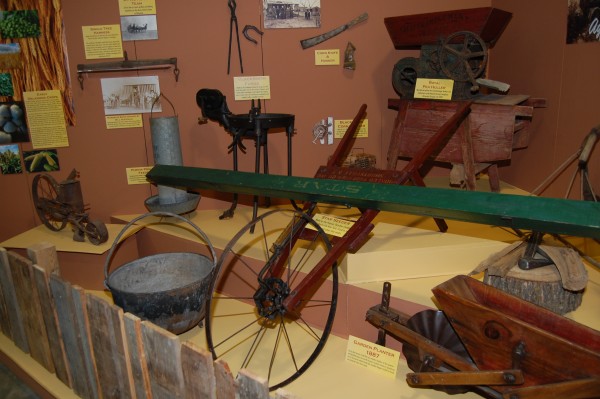 At the time of the 1889 Land Run, Oklahoma consisted of a wilderness of prairie and forest lands that offered a new chance for American farmers. Edmond is located geographically near the Cross Timbers, an area about 40 miles in breadth stretching over a land of rolling hills and ravines, covered with tracts of post oak and blackjack trees as well as other scrubby underbrush. The Cross Timbers serve as a divider between the bluestem prairies of the east and the shortgrass plains of the west.

Clearing the land of rocks and stumps in preparation for crops required back breaking labor. Hard work, optimism, faith, and persistence were values learned from tilling the soil and have made a lasting imprint which can be seen in Oklahoma today. A variety of implements were used on the land and many of them are represented in the farm implements exhibit. Farmers used tools to plow the land, plant the seeds, and cultivate the crops. Other necessary tools included those used to condition or repair the implements used in planting crops. Despite the many setbacks Oklahoma farmers experienced – including droughts, insect plagues, low prices, high transportation costs, and over production – Oklahoma farmers persevered. Built upon a foundation of agricultural productivity, Oklahoma’s economy steadily improved, providing the needed capital for industry, oil, and commerce.   Cotton was the king in Oklahoma. At one time there was a “Cotton Gin” in Edmond, however, the farming land around Edmond was not suited for raising cotton. Wheat became an important crop for the early farmers. A flour mill was established by James Martin who arrived the day of the run. J.H. Snyder, an early mayor of Edmond, established a flour mill prior to his death in 1895. In 1897, Isaac W. Rodkey and George Farrar, purchased what was then known as the Gallihugh-Martin Flour Mill, renaming it the Eagle Milling Company.