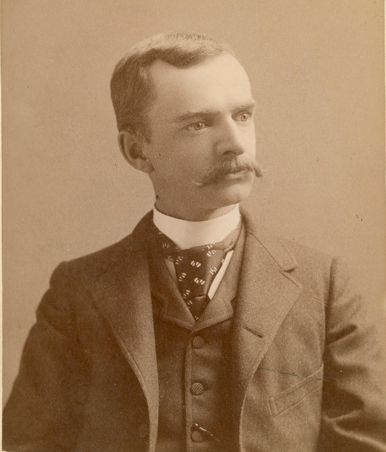 The town of Edmond, Oklahoma was named for Edmond Schuyler Burdick, a traveling freight agent for the Atchison, Topeka and Santa Fe Railroad.

Formerly designated “Mile Marker 103” by a party of surveyors with the Southern Kansas Railway, the name was officially changed on March 28, 1887 by Santa Fe officials. The place names along the Santa Fe rails serve as a roster of its official personnel. Name changes of towns in Indian Territory were quite common, including the neighboring town of Guthrie, which took its name from Judge John Guthrie, an ATSF attorney and stockholder.

Edmond Schuyler Burdick was born on July 16, 1858 to Elisha and Maria (Edmond) Burdick in Madison, Wisconsin. Burdick attended Madison High School and graduated the youngest member of his class at the University of Wisconsin in Madison with a Bachelor of Law degree in 1880. His father was an active pioneer, attorney, and real estate developer in Territorial Wisconsin. Edmond’s first name was his mother’s maiden name.

Edmond began his railroading career in 1881, working first for the Atlantic & Pacific Railroad. Afterward, Burdick practiced law for three years in Madison before returning to the rails. Over the course of his professional life, Burdick worked for many different railroad companies, however, the majority of his career was spent with the Atchison, Topeka & Santa Fe.

As early as 1884, the Wichita Daily Eagle reported that Burdick was making business trips to Wichita, Kansas. In November 1885, when the Southern Kansas Railway was pushing their road construction south toward the Unassigned Lands, Burdick joined the engineering department of the Atchison, Topeka & Santa Fe Railroad. In March 1887, when Burdick had begun working as an assistant right of way agent for the same road, station points along the Arkansas City extension were being named by the Santa Fe Railroad.

In 1891, Burdick was listed in the Wichita City directory as a Traveling Freight Agent. That same year, The Edmond Sun published what would become an important link to the town’s namesake, (seen at right). Just two years after the Land Run of 1889, on a business trip south in August, Burdick told the locals that he was very pleased to see the town that was named after him doing so well.

Burdick traveled his entire professional life, living in major cities like Chicago, Minneapolis, and New York. On June 26, 1895, Burdick married Katherine Thayer Walker in Manhattan, New York when he was 36 years old. In 1898, Burdick began working as a U.S. representative for the Mexican Central Railway. Edmond Burdick died on March 26, 1909, at the age of 51, from complications of typhoid fever in Mexico City where he had been living the last six years of his life.

Watch the News OK video about the Edmond Burdick discovery by clicking here.

After two years of research in 2011, Nina Hager, Exhibit Director for the Edmond History Museum & Museum, discovered the lost history of Edmond Burdick. Her dedicated and systematic research uncovered the first ever seen photograph of the Edmond’s namesake in over 120 years. A booklet entitled Edmond Burdick: Railroad Agent, containing more information about Burdick and his family, researched and written by Hager, is now available in the Museum’s Welcome Center & Gift Shop.

Quarter-length studio portrait of Edmond S. Burdick with Moustache, Wichita, Kansas, WHS Image #82866 (Detail) is reproduced with permission of the Wisconsin Historical Society Historical Images Collection. The Edmond History Museum & Museum does not hold the copyright for and cannot reproduce, sell or provide copies of this image. All requests for copies of this image must be directed to the Wisconsin Historical Society.

The Edmond Sun, August 14, 1891, “A Friend,” article, courtesy of the UCO Archives.”The Normal” refers to the first Territorial Normal School, the site of today’s University of Central Oklahoma’s Old North Tower, with first classes held in 1893.