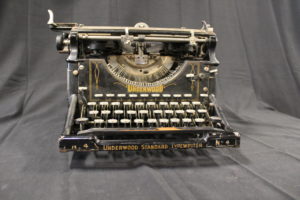 As a full-time UCO student, the homework can be monstrous, especially on my old laptop which is big, bulky, and has keys that no longer work. I’m sure many other students can relate, but as bad as we have it, imagine doing your homework on one of these amazing machines, circa the 1930s. The Underwood no. 4 was even used by an Edmond High School student for his typing practice homework, and he continued to use it during his college years. Imagine how much fun it would be to type out that twenty-page historical research paper on this. No autocorrect and no way to easily fix your mistakes without retyping the whole page. Sounds exciting, right? Maybe my old laptop isn’t so bad after all. All jokes aside, these are some amazing pieces in the collection here and being able to see them up close gives me a whole new appreciation for the tribulations of all the students that have come before me.

This first typewriter is a vintage Underwood no. 4. It’s easy to imagine this machine in its prime with glossy black paint and gold pinstripe designs to match the lettering. Pretty snazzy. The Underwood Typewriter Company began as the Wagner Typewriter Co., named for the man that designed them, Franz Wagner. Originally, Underwood only sold ribbons and carbon paper for Remington typewriters, but once Remington decided to produce their own ribbons, Underwood transformed

from a complementary merchant to a rival business in 1895. Franz Wagner personally designed the first two machines of the series before his investor, John T. Underwood, took over the business. The company did well enough that the word “Underwood” was sometimes synonymous with typewriter due to its popularity. There were poems, articles, and books referencing the name as the obvious choice of typewriter. Well-known authors such as William Faulkner, F. Scott Fitzgerald, and Ernest Hemingway were said to have used this particular brand.

Up next is a Remington Noiseless 8.  The company, E. Remington & Sons, primarily manufactured firearms, but expanded their business when they received the patent for their first typewriter in 1868. The one in this picture is roughly from the 1930s, and their

dedication to progress definitely shows. Still shiny with a black coating and silver embellishments, the design was much sleeker and boasted soundless typing for the busy student or budding professional. With such different designs, it’s hard to imagine that both typewriters came from the same time period, but Remington did have quite an advantage over Underwood, as Remington had been manufacturing typewriters since 1868, almost 30 years before Underwood.