The Case of the Shrunken V-Mail

Edmond History Museum > The Case of the Shrunken V-Mail 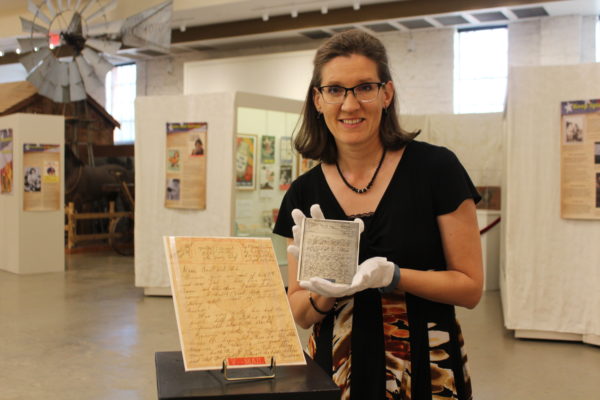 Exhibit Coordinator Amy Stephens with the different forms of V-Mail; the larger is what the sender would have written on and the smaller “letter” Amy is holding is what would have been delivered to the recipient.

I assumed I knew what  V-Mail (Victory Mail) was during World War II—a government-issued stationery on which people could write back and forth overseas.

True! But when I pulled two actual pieces of  V-Mail from the archive, I was in for a surprise. One looked like the yellowed hand-written letter I expected. The other was a tiny, shiny scrap of paper. It was like a dark photocopy of a  V-Mail letter. The cursive writing was so small I could hardly read it.

I asked myself, “Why would someone put a copy of V-Mail in the archive?” It was a mystery to be solved!

After further research and some great information from the National Postal Museum, it turns out that the photocopy was the actual end-product of  V-Mail.

Tons and tons of a ship’s cargo space was being used for mail bags instead of war supplies. The government didn’t want to discourage families and military workers from corresponding, because good morale was as vital as food to the soldiers. Instead of banning communication, “photo-mail” technology was developed. By reducing hand-written letters onto microfilm—the mail took less space and could arrive overseas more quickly on an airplane than by boat.

During the 3 years that  V-Mail operated, over 500 million pieces traveled back and forth between the United States and other countries. 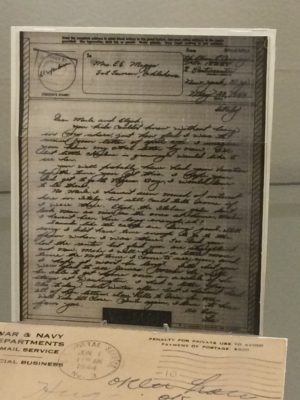 This is the smaller letter that was delivered to the recipient, 1/4 of the size of the original.

Over time,  V-Mail earned some nicknames, like “funny mail” and “tiny mail.” One does have to wonder how much time a serviceman spent huddled over his  V-Mail with a magnifying glass, trying to interpret the shrunken handwriting. What if he could never read it? Can you image how many times a soldier asked his buddies to look at those hard-to-read words so they could make squinting guesses? Although I am a fan of cursive writing, I think  V-Mail recipients would have benefited from some easy-to-read block printing.

What about the name? The  V-Mail name came from the popular patriotic slogan, “V for Victory,” often symbolized by the Morse Code letter V (V…-). I wonder if some WWII buff was later responsible for the name of “Email?”

So, the Mystery of the Shrunken  V-Mail is solved. Although museums don’t usually collect photocopies of things—this is a rare case where the photocopy is the actual artifact!